We at Barcelona Golf are delighted to announce that PGA Golf de Catalunya has been chosen as candidate to represent Spain as candidate for the Ryder Cup in 2022.

Real Federación Española de Golf, along with Generalitat de Catalunya and other public Spanish and Catalan stakeholders, have announced their intention to bid to
bring The 2022 Ryder Cup, the golf biggest confrontation between Europe and United States that will take place, if elected, at PGA Catalunya Resort (Girona), recently
awarded European Golf Resort of the Year 2015.

Gonzaga Escauriaza, President of the Real Federación Española de Golf said: “Few countries in the world have contributed as much to the development and promotion of
European golf as Spain has over the last 30 years. Bringing The Ryder Cup to Spain is a central part of our strategy and will continue our proud PGA European Tour heritage. The Ryder Cup’s power to drive participation amongst new players and showcase our world class courses across the globe is unique. We are delighted to have received so much committed support from stakeholders and we look forward to submitting acompelling bid to the European Tour.”

Iván Tibau, Secretary General for Sport, Generalitat de Catalunya said; “The world cities of Barcelona and Girona will be the gateways for golf fans from across the globe
to experience the world leading cultural attractions, hospitality and landscape of the region. We have a world class venue, established infrastructure and an unparalleled
track record of delivering the world’s largest events. We should be very confident in our credentials and our ability to meet all of the requirements of a modern Ryder Cup. All of our regional partners recognise the wide ranging benefits that The Ryder Cup will bring to the region – our bid committee is unified in their commitment to bring The 2022 Ryder Cup to Catalunya.”

Denis O’Brien, PGA Catalunya Resort proprietor, said, From its inception, the Stadium Course was designed and built with the intention to one day host The Ryder Cup.
Hosting the 2022 match would be the realisation of this vision. We have worked extremely hard and invested significantly in recent years to make PGA Catalunya Resort unique. It is much more than a golf resort; it is a global golf destination. We have plans to further develop our courses and luxury property offering to introduce to the world the next generation of golf resort. This bid has our full commitment.”

Readily accessible from the world renowned cities of Barcelona and Girona, the PGA Catalunya Resort has been voted Spain’s No. 1 golf course for 3 consecutive years and was recently awarded the title of European Golf Resort of the Year 2015 by the International Association of Golf Tour Operators.

Barcelona and Girona are connected by a high speed rail line, transporting passengers between the two cities in just 37 minutes.

The beaches and holiday resorts of the Costa Brava are a short 25 minutes drive from the course.

About The Ryder Cup

The 2022 Ryder Cup will be the XLIV edition of this biennial competition –started in 1927- between teams from Europe and the United States. Until 1979 there were only
British golfers in the European Team, and from then, continental European golfers were included in the team.

Since then, nine edition of The Ryder Cup have been played in United States, five in England, one in Ireland, Wales, Scotland and another one in Spain (Valderrama 1997). Next Ryder Cup will take place in Hazeltine National Golf Club (Chaska, Minnesota, USA), 2016; Le Golf National (París, Francia), 2018; Whistling Straits (Kohler, Wisconsin, USA), 2020.

Six nations remain in the running to host The 2022 Ryder Cup Ryder Cup Europe can announce that six nations have formally confirmed their intention to submit a Bid for The 2022 Ryder Cup. From the list of seven nations who initially expressed an interest in hosting what will be the 44th staging of the biennial contest between Europe and the United States, Denmark has advised of its intention not to proceed with a formal Bid leaving Austria, Germany, Italy, Portugal, Spain and Turkey still in the running. Turkey’s formal notification to bid was accepted by Ryder Cup officials and supersedes their earlier decision to withdraw.

Ryder Cup Director Richard Hills, said: “The Ryder Cup bidding process has a number of important milestones and we very much look forward to working with the six bidding nations, their representatives, and their national golf federations, in developing the specifics of their respective 2022 bids.

“The key criteria we have in place ensure we evaluate each bid equally on both its sporting and commercial merits, while allowing us to judge each bid fairly and thoroughly.”

Having already taken delivery of an official information pack, the six bidding nations will prepare to host a series of meetings and inspection visits by Ryder Cup Europe officials between now and Thursday April 30, 2015, which is the date that formal submission of official bids need to be made.

Following the series of inspections, a period of detailed analysis of each bid by a management team working on behalf of Ryder Cup Europe – together with the assistance of an independent panel of experts – will be undertaken, with the announcement of the successful host country and venue for The 2022 Ryder Cup planned for autumn 2015.

Barcelona Golf Travel has won the award as the Best Golf Tour Operator in Spain at the 2014 World Golf Awards in Portugal.

The World Golf Awards is part of the World Travel Awards (WTA), which was established in 1993 to acknowledge, reward and celebrate excellence across all sectors of the tourism industry. Today, the WTA brand is recognised globally as the ultimate hallmark of quality, and has been dubbed ‘the Oscars of the travel industry’.

“The World Golf Awards has been created in response to a demand from the golf industry for a fair and transparent programme that would celebrate and reward excellence in golf tourism, as well as recognise world-class courses & golf destinations,” explained Chris Frost, Managing Director, World Golf Awards.

“Voted for by professionals working within the golf travel and tourism industry, including senior executives, travel agents, tour operators and media professionals, as well as members from the general public (golf tourists) the World Golf Awards aim to stimulate both the domestic and international golf tourism markets.”

With an estimated 50 million golf tourists travelling the world to play 32,000 golf courses and resorts worldwide, golf tourism constitutes a vital segment in the global travel and tourism marketplace. The inaugural World Golf Awards will focus on the leading 130 nations that are shaping the future of this dynamic industry. 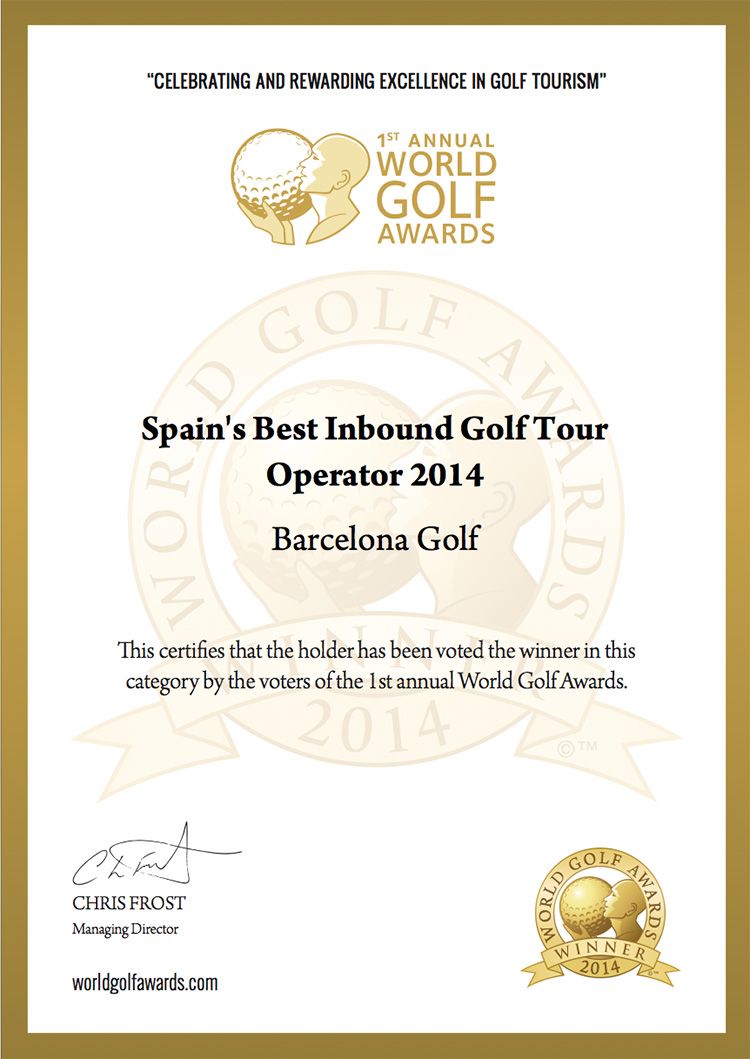